Over the past 50 years most of my time has been spent living in the Cowichan Valley exploring every square inch of this area but, surprise surprise, there always is something new to find. The other day my love, as we drove down Telegraph Road, pointed to a one grave cemetery on the side of the road. I had never ever noticed this little scene. 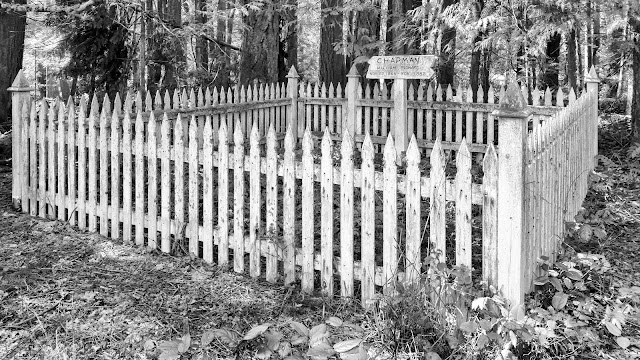 Chapman is an old family name in this area and Chapman Road running sort of parallel with Telegraph Rd (as the crow flies about 1 km away from this little cemetery) shows that the family had their homestead here. William Richard was the oldest of five, with the youngest being born two years after he died.
A hardship of homesteading was lack of services. One day the boy, helping his father bringing in the hay, developed severe abdominal pains. The nearest doctor was in Ladysmith more than forty km from where they were, impossible to get to in time, and the boy died. He was buried on the homestead. The grave site deteriorated over time until a boyscout troop came across it and decided to restore the site. They rebuilt the picket fence, cleaned up and painted. This must have happened not that many years ago since it still looks in good repair. In a contemporary sense this whole little thing is totally unimportant except for the fact that it makes a person think about the drama that homesteading families had to deal with. Mrs Chapman lived till 1941. She was right up to her final days intensely involved with the community and with other local pioneer families she shaped the area into today's landscape with many people here still depending on the land and often taking on pioneer-like community supporting responsibilities.
Posted by Joseph de Lange at 7:34 PM